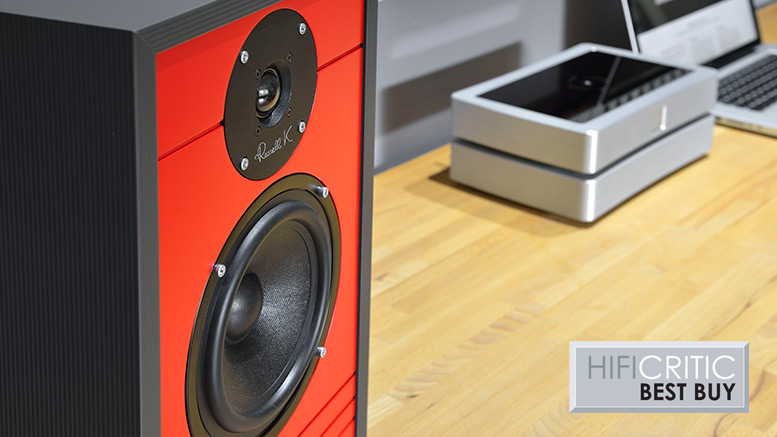 I first mentioned the Russell K RED 100 speaker in my back page column three issues back (Vol7 No4), purely as an example of the increasing trend to bring the production of UK-designed loudspeakers back from the Far East to Eastern Europe – Poland in this instance. It’s not that Chinese and other Far Eastern countries can’t make decent loudspeakers at very competitive prices – the past decade has clearly proved that the reverse is true. But working closer to home can also have benefits, especially for the relatively new and small operation, where some flexibility is useful and transport costs for small quantities are likely to be less. Furthermore, the cultural ties are much closer, which might be a rather more nebulous benefit, but seems to be just as important, especially in such matters as education.

I was initially reluctant to carry out a formal review of the speaker, for at least two reasons. First, I’ve known Russell Kauffman for a very long time, because he used to be a regular member of the ‘blind’ listening panels I operated while carrying out loudspeaker group tests for Hi-Fi Choice magazine, probably for the best part of twenty years. Under such circumstances, could I avoid favouritism and retain any degree of objectivity? Then there’s the worry about reviewing anything from a brand new start-up operation. Would I like it, and if not, would publication damage an embryonic company? Happily, my fears were unfounded: first because I immediately really liked the sound of the RED 100; secondly, by the time I managed to schedule a review, I discovered that no fewer than ten leading UK dealers had already been sufficiently impressed to stock the speaker.

In configuration terms the RED 100 is a classic two-way stand-mount, though the shape is almost self-consciously oldfashioned. However, the presentation of the £1,199/pair base model is
decidedly unconventional in that an inset front panel is painted red (hence the name), though the fainthearted can now specify black, and in both cases four horizontal grooves add worthwhile decoration. Elsewhere the finish is textured, with a heavily ribbed, corduroy-like effect. Those who prefer a more traditional look can pay more – real wood on five faces costs £1,399; high gloss piano black on all six faces is £1,599.

The 26x40x27cm (WxHxD) shape might give a distinctly nostalgic impression – I couldn’t help thinking ‘Linn Sara’ whenever I looked at it (even though this RED 100 has a smaller main driver)
– but it makes good sense in creating a strong enclosure, has sensible internal dimensions, and an overall enclosed volume of around 18litres. (A rather smaller RED 50 is also currently under development, with anticipated prices of £799, £899 and £999 respectively, and a floorstander is also promised.) The RED 100 combines a 165mm (6.5in) bass/mid driver and a 25mm plastic dome tweeter, in a rather unusual port-loaded enclosure. The main driver has a 115mm diameter flared paper cone, a pressed steel frame, a large and hefty magnet and a 25mm voice-coil with a Faraday eddy-current shorting ring. A single pair of high quality WBT terminals protrudes from the back of the speaker and feeds a relatively simple crossover network, which is claimed to operate around 2.2kHz at an acoustic total of 12dB/octave. Just a single component is in series with each driver – a ‘closed field’ inductor is used on the bass arm, and a capacitor is in line with
the tweeter. Tweeter attenuation is by a modified Zobel network rather than a simple resistor or tworesistor L-pad.

The whole thing weighs 11kg, which is a decent enough figure for a stand-mount, but in context the cabinet approach and construction is rather unconventional. The designer acknowledges the
importance of the BBC ‘thinwall’ approach, but also its low frequency limitations, and has opted for an entirely undamped but well stiffened enclosure in 16mm MDF (19mm front baffle). The interior has two multi-function horizontal shelves drilled with holes, positioned above and below the main driver and separating the driver from the port below the shelf. One purpose is simply to stiffen the whole box, but another function is to filter the midrange’s rearward output so that it stays within the central section and well away from the port, while at the same time allowing all of the internal volume to take an active role in the bass reflex loading. The port itself is tuned to a relatively low 33Hz here, but a crucial factor is probably the lack of the usual internal damping materials, which some consider may be responsible for ‘slowing’ the sound. (The internal perforated partitions will inevitably add a measure of damping.)

Measurements
Using our in-room far-field averaged technique, the sensitivity comes out at around an average 87dB, though this ought to be seen in the context of decent bass extension (-7dB at 20Hz in-oom)
and an relatively easy amplifier load. The latter stays above 6ohms all the way up to 11kHz, falling to 3.3ohms at 20kHz (where programme energy will be vanishingly small). The frequency response looks fairly well ordered, an essentially even trend characterised by a clearly deliberate trough around the presence zone. This consists of two dips, one at around 1,2kHz and then
a second dip at the 2.2kHz crossover frequency. Rather more worrying was an obvious +4dB resonance ‘spike’ at c850Hz. I took this up with the designer who admitted that it existed and that he was aware of it. He also told me that he’d found a way to eliminate it, but having done so found that the speaker had lost a good proportion of its ‘magic’. He therefore decided to bite the bullet and learn to accept (and ultimately ignore) the spike.

Sound Quality
I also found it very easy to accept (and ultimately ignore) that spike, as the RED 100 basically sounds very clear and open and has a beautifully judged overall balance. True, the sound can get a touch aggressive when played at very high levels, and it might have had a bit more bass weight and warmth. But the speakers do sound rather bigger than they look, and above all they know how to stop as well as start, so they bring a rare dynamic crispness to the proceedings.

A slightly ‘woody’ quality seemed audible on some material, and might have been related to the lack of internal damping, but it wasn’t unduly distracting. Having brought the speakers in for an extended listening session, after making the usual notes I found I had little desire to replace them, and in fact
spent a very happy week listening to them across a wide range of material and sources, and finding the music they were reproducing exceptionally communicative.

While there’s no avoiding the superior top-tobottom coherence or the fine stereo imaging, the RED 100 is really all about speed and dynamic literacy, rather than issues of tonal balance or
coloration. I recall experimenting with the removal of acoustic damping twenty something years ago, after Jimmy Hughes recommended giving it a try. Results then were somewhat equivocal – I could hear both advantages and disadvantages. What I suspect Kauffman may have succeeded with the RED 100 is to gain the benefits of removing damping materials without the attendant drawbacks, and that is an impressive achievement.

Conclusions
The RED 100 might – indeed does – look a little weird, and might indeed have a significant measurement flaw, but a quick listen should be enough to convince a listener that its sound quality
is rather more than a little bit special. It has dynamic expression and coherence to die for, and that ensures excellent musical communication.